Greenhouse gases are defined as gases in our atmosphere that absorb and radiate heat energy.  CO2 has some special properties that make it hot stuff.  Let’s take a closer look!

In PDQ 1 we learned about CO2 levels around us and how they are increasing at a regular rate, year after year, as we see in the data gathered at the Mauna Loa observatory and presented in the Keeling Curve.  Now that you understand global CO2 levels are increasing, and you have even learned to take CO2 readings yourself, let’s look at what effect CO2 has on our planet.  You will frequently hear the term global warming associated with CO2 – but how are they connected?

The concept of the “Greenhouse  Effect” explains how CO2 and global warming are connected.  Essentially, like a greenhouse, light and heat can penetrate through the glass covering a greenhouse and some of it remains trapped inside.  If you have ever entered a greenhouse, you will immediately notice it is warmer and more humid than the outdoor air.  This is a good analogy as to what is happening on a much larger scale with CO2 and other greenhouse gases that are in our atmosphere.

Sunlight, including infrared radiation, penetrates our atmosphere and reaches the surface of the Earth.  Some of it is absorbed and some of it is bounced back towards space.   Greenhouse gases like CO2 trap some of this heat energy before it escapes to space, keeping our planetary temperature warm and comfortable. Global warming studies need to take into account the fact that increasing amounts of CO2 result in warmer global temperatures.

Let’s explore this further with databot™! 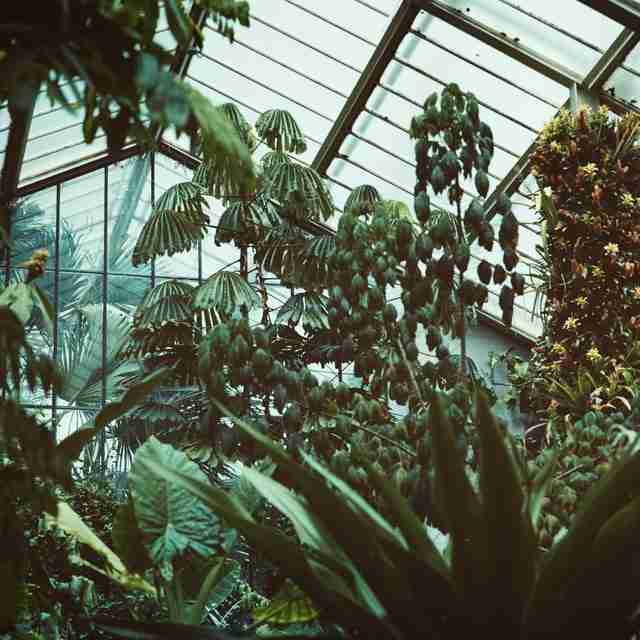 By completing this experiment and conducting the scientific observations associated with it you will master the following knowledge! Good luck science explorer!

Carbon:  A highly abundant, incredibly important chemical element with the symbol C that, due to its unique ability to form bonds, serves as a common element to all known life. All life that we know of we refer to as “carbon-based” and our human body is made up of approximately 18.5% carbon.

Carbon Dioxide (CO2): A colorless, odorless gas comprised of oxygen and carbon that is naturally present in the air you breathe and is absorbed by plants in photosynthesis.

Carbon Sequestration: In response to CO2 driven temperature increases, carbon sequestration proposes the long term storage of carbon in solid or liquid form to remove it from the atmosphere. Trees and forests are a natural method of carbon sequestration as they convert CO2 into usable carbon through photosynthesis.  A tree trunk is a massive carbon storage vessel for example.

Climate: The weather over a prolonged period of time in a region is called climate.

Climate Change: A change in global or regional weather patterns. Global climate change is linked to the steady increase of CO2, a gas that traps heat, in our atmosphere.

Deforestation: The permanent removal of forested areas and converting the land use to housing, farming, or other applications is called deforestation.  Deforestation should not be confused with the organized harvesting of forests, a renewable resource.

Global Warming: The ongoing rise in the average temperatures around the world is called global warming and is linked to an excess of greenhouse gases such as CO2.

Photosynthesis: The chemical process in plants, driven by sunlight, that absorbs carbon dioxide from the air and combines it with water to provide the carbon needed by the plant to form complex molecules that enable it to grow and repair itself.

This experiment provides background on how CO2 absorbs and radiates heat and energy, then you will build a simple model “greenhouse” to see the greenhouse effect in action. 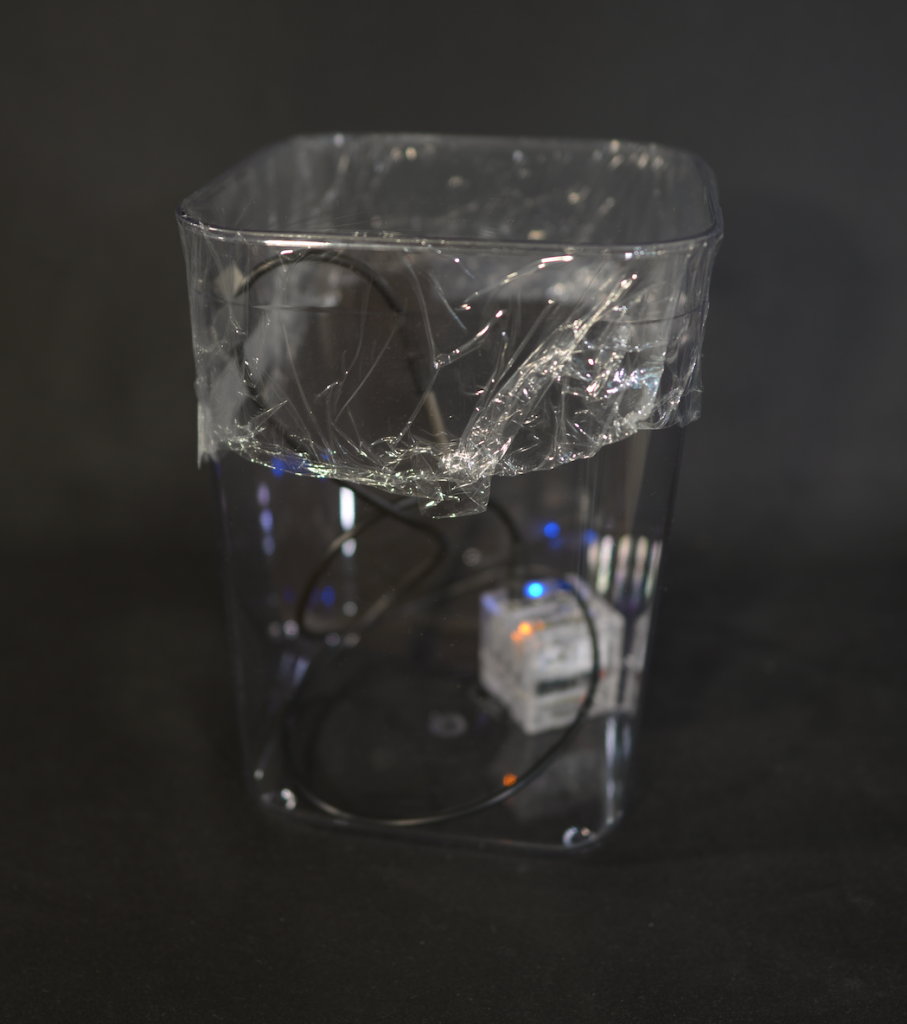 Shown here is a setup in which we used two databot™s in identical containers to see if we could demonstrate that CO2 traps more heat than regular air. 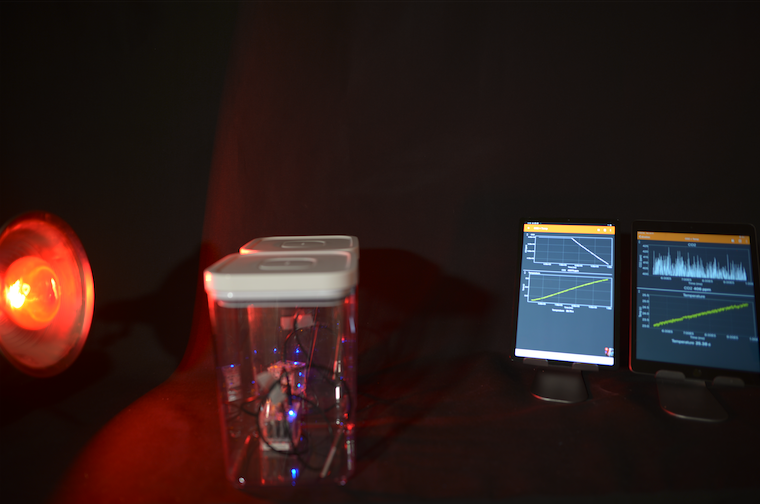 This is a difficult experiment to replicate without strict controls as there are a number of variables that might be slightly off.  The angle of the heat lamp, the plastic material that the heat is penetrating, the CO2 leakage from the container, identical calibration of temperature probes, etc.

However, we know from the work of many scientists that CO2 does indeed absorb and hold heat and in effect, creates a layer of gas that prevents heat that bounces off our earth from escaping into space. 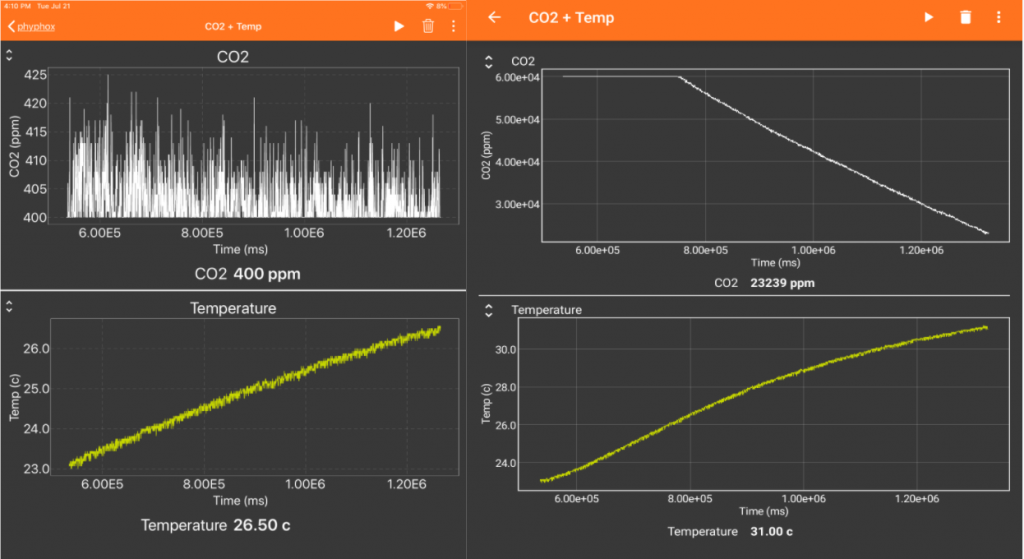 This is why our planet is warm and comfortable – without greenhouse gases our entire planet would be around Zero degrees F, so this layer of greenhouse gas is incredibly important to life as we know it.

In this activity you will simulate the greenhouse effect through a simple experiment. You will monitor the temperature of a container in direct sunlight.  The first half of the experiment will be conducted with no greenhouse gas layer to trap heat.  The second half will be done with a layer of heat trapping material (plastic wrap) simulating our atmosphere. 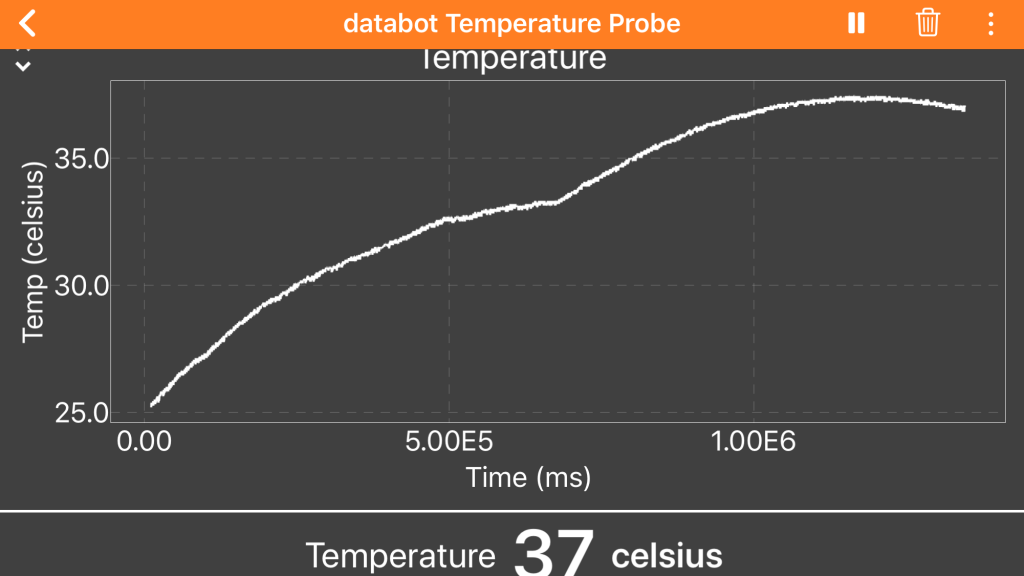 What is happening in this graph of our databot™ experiment using the open and covered container? Can you tell when we covered the container with plastic wrap from looking at the graph?

Awesome possum science explorer.  You’ve learned a lot about Carbon Dioxide and how important it and other greenhouse gases are to keep us warm.  You’ve also learned that our steadily increasing levels of CO2 could be harmful – what if our planet gets too warm?  Let’s explore the CO2 challenge further with another experiment.   Ready?  Let’s go!

Now that you’ve mastered PDQ 1 and 2, are you ready for a bigger bite? Next stop, the Experiment!

Next Step, an Experiment! You’re Getting Warmer! by Robert O. Grover & Team databot™ is licensed under a Creative Commons Attribution 4.0 International License. Permissions beyond the scope of this license may be available at databot.us.com/contact.