The United States Department of Defense (DoD) places a high priority on Science, Technology, Engineering, and Math (STEM) education, recognizing that success in the future relies on developing motivated, STEM literate students today.  DoD STARBASE is one highly successful STEM initiative that, since 1993, has positively impacted over 1.3MM students.  Sponsored by the Office of the Assistant Secretary of Defense for Manpower and Reserve Affairs, according to the 2019 Annual Report, the program supported innovative STEM programs at 69 locations in 33 states and impacted nearly 100,000 students.   The STARBASE 2.0 Outreach program,  a unique program designed for implementation on school campuses, is now in 99 locations in 23 states.  Within the annual report are numerous stories and examples of students who have been inspired by the engaging, hands-on curriculum delivered by DoD STARBASE.  With over 20 years of historical impact in place, many of these students have gone on to successful careers in STEM fields, demonstrating the power of early STEM education experiences.

DoD STARBASE locations on bases and school campuses span coast to cost and include Hawaii and Puerto Rico!

To be the premier Department of Defense youth outreach program for raising the interest in learning and improving the knowledge and skills of our nation’s at risk youth, so that we may develop a highly educated and skilled American workforce who can meet the advanced technological requirements of the Department of Defense.

Patrick Yonnone is the Director of STARBASE Austin located at Camp Mabry, Austin.  2020 turned out to be an interesting year for STEM education professionals all over the world due to the Covid-19 pandemic and Patrick’s program was no exception.  With the STARBASE Austin summer STEM programs normally conducted on-campus and in-person, Patrick and his team were challenged to come up with a new approach to promote hands-on engagement with STEM via virtual learning for a summer program that served 50 Austin-area Girl Scouts divided into 4 cohorts.  STARBASE Austin accomplished this through the selection of tools that could be effectively implemented by the girls in remote locations being coached virtually.  All participants had smart devices in a 1:1 iPad implementation, so compatibility was important.    One of the tools selected for a full week of STEM programming was databot™, a product uniquely well-suited for remote learning due to the following features: 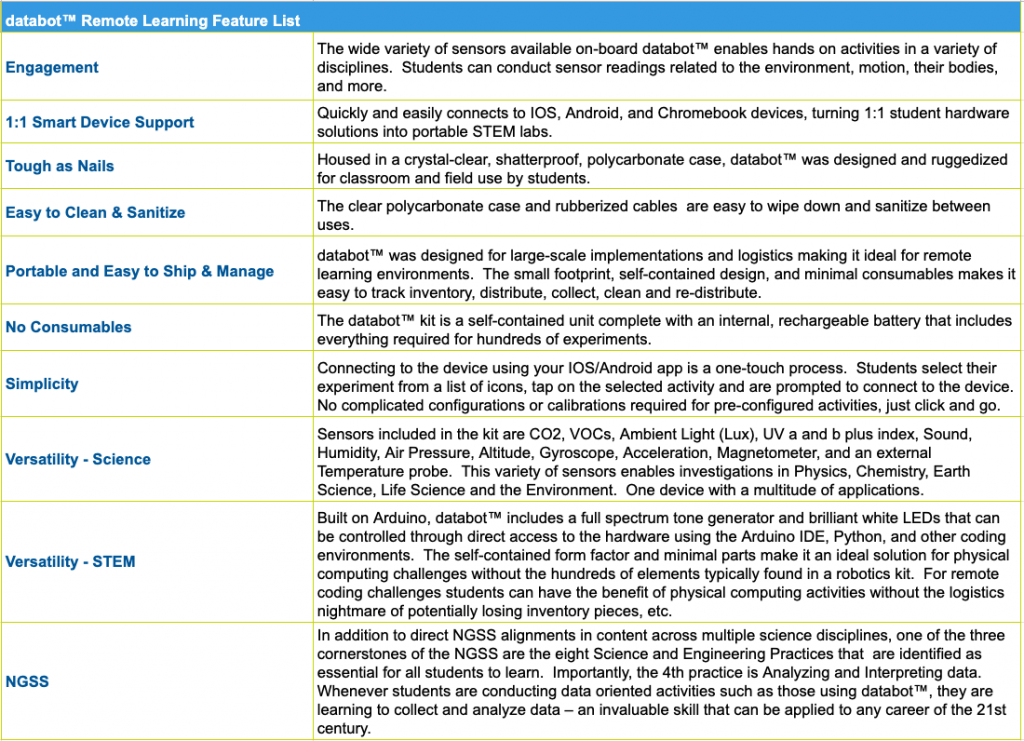 Using existing curriculum from the databot™ CO2 Science Series as well as their own custom-developed activities, the STARBASE Austin team put together 5 days of sensor-based, science exploration.  The program was delivered through a  video-based virtual instruction model that began each day with a 45 minute problem-based scenario, experiment demonstration, and discussion. Students learned about and tested the sensors for the day and then were introduced to the topic and scenario through discussion and demonstration.

After the morning session, armed with their training and hypothesis, the students then broke from the virtual session to conduct their explorations and experiments offline using databot™, their iPads, and simple materials supplied by the STARBASE Austin program to all participants.

After conducting the experiments in which they collected data using databot™ and an iPad, the Girl Scouts reconnected online to defend or revise their hypothesis.  During this afternoon session, STARBASE staff facilitated a group discussion of the experiments, the results gathered, and lessons learned.

Patrick’s group developed their databot™ curriculum around the Texas Essential Knowledge and Skills (TEKS) framework.   The interdisciplinary experience included activities in Chemistry and Physics in which students explored chemical reactions, indoor air quality, ultraviolet light, acceleration, gravity, density of gases, and sound. Each day focused on a new sensor and path for exploration, and the versatility and flexibility afforded by the large variety of sensors provided a number of opportunities for interdisciplinary activities that brought scientific phenomenon to life through data visualization.

Using databot you can easily see the changes that take place in the experiment as you record and display data over time.

Review the Cave of Dogs curriculum module in the databot™ lessons area to see the types of activities the STARBASE students experienced.

Dawn is a Girl Scout Troop Leader that was involved in the STARBASE Austin program, not just as a troop leader, but also as a mother as her daughter, Brittyn, was one of the attending Scouts.  Brittyn described her experience with the STARBASE Austin program as very positive and a good learning experience.  Her favorite activity?  The hunt for Volatile Organic Compounds (VOCs).  Using her iPad and databot™ Brittyn discovered VOCs in a number of items around the house such as air fresheners and cleaners, the most interesting item was vanilla!  Brittyn also enjoyed the Cave of Dogs which was an interesting and relevant activity since the family had visited Longhorn Caverns a few weeks before.

The format of the STARBASE program – virtual discussion in the morning, a break for hands-on experiments, then re-grouping in the afternoon online was a great format and Brittyn said that was the best way to do it.  After the weeklong experience, Brittyn and her mother brainstormed other ways to extend on using databot™ and agreed that taking it on amusement park rides or flying it on a sport kite would be a lot of fun as well as educational.

As a Troop Leader, Dawn’s observations centered around the need to bring physical, hands-on learning to augment the virtual.  She described activities the Troop had done this year such as making jewelry and organizing get-togethers around other hands-on projects. Her takeaway from her experience over the past year is that getting together online for discussion needs the engagement of hands-on activities to make it successful.

“The hardest piece of all this virtual learning is needing the hands-on.  With hands-on, you’re having fun, it’s interactive, and it’s more effective.”     — Dawn 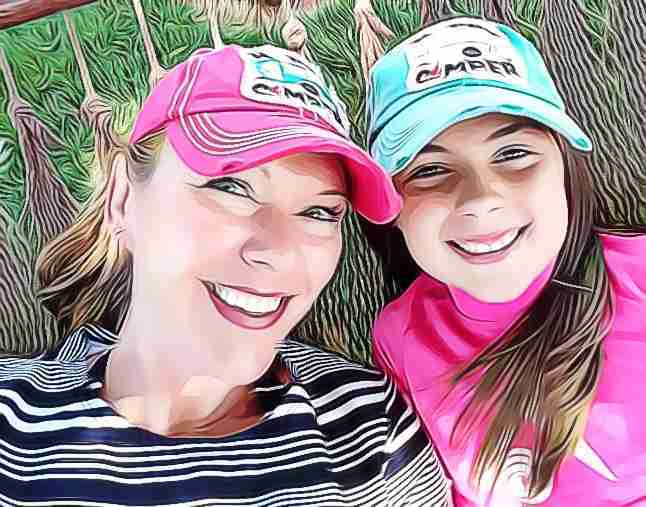 “The hardest piece of all this virtual learning is needing the hands-on.  With hands-on, you’re having fun, it’s interactive, and it’s more effective.”

The following are observations from a number of the STARBASE program participants.   Science and investigation in action – NICE WORK Scouts!!  Click on any of the gallery images below to get a full size view of these portfolio entries.

In conclusion, the STARBASE Austin summer program instructional model was a successful combination of hands-on learning and virtual instruction that effectively engaged remote students in STEM activities.  The ease-of-use of the one-touch iPad app that connected easily to the databot™ sensors, databot™’s versatility across multiple science domains, and its durability were all important features for a successful remote learning experience.

To learn more about the STARBASE Austin summer program or the DoD STARBASE program overall additional information is provided in the following references section. 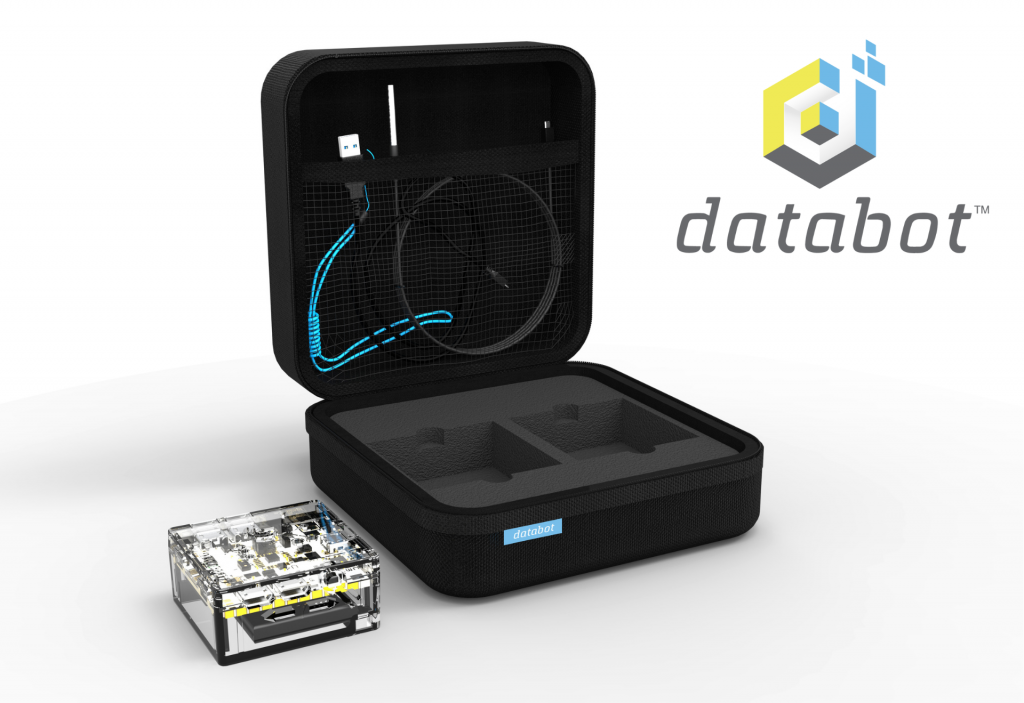 Disclaimer
Nothing in this document is intended to imply an endorsement or recommendation of databot™ by the US Department of Defense, the STARBASE program, or the Girl Scouts of America. Any logos and trademarks belong to their respective organizations.