Wednesday, April 24th, we had another opportunity to test databot™ in the field, this time with a class of STEMthusiasts from a local charter school. Our goal was to continue testing the range and durability of databot™ as well as our connection to Google Science Journal (GSJ). This time we added a new variable – Chromebooks!

As in our field testing earlier in the week, we focused on some high-energy, high-impact tests that were a great test of databot™’s abilities as well as exciting for the students to participate in. The class we had the opportunity to work with was a group of middle school students in an after-school STEM club. The current project they are working on was building and launching rockets, a perfect opportunity to insert databot™ field testing on an air-powered Estes rocket. The following hour was a lot of fun as we progressed through a few rocket launch related topics preparing to send databot™ sailing into the clear blue sky once more!

An Introduction to Motion

We began with a brief introduction of databot™ to the students, highlighting the kinds of data it can sense – CO2, light, UV, altitude, and motion were all examples. A brief discussion on how databot™ can sense things like altitude led to more awareness of air pressure and how it changes at different elevations. Next, since the class is studying rockets, we naturally progressed into discussions about motion and Newton’s three laws and settled on the second law:

The second law and a discussion of the Force acting on a body and the formula F=ma emerged as something very important to launching rockets. Quizzing the STEM club about the formula and seeing what they remembered was awesome as one student, now and forever known as “Major Force,” explained the F in the formula:

Next, came the “m” – what is that? When we started the introduction to databot™ the class passed it around and took turns guessing its mass. The student henceforth known as “The Human Scale” was closest with 60 grams (actual as tested that day was 64 grams). In the formula then, we had determined “m” or mass was 64 grams. To make sure we had the total mass that we were going to be launching, we needed to know the mass of the rocket also. Weighing procedures by the science teaching staff and students were quickly handled with the results of the weigh-in coming in at 55 grams. Total launch mass: 119 g. 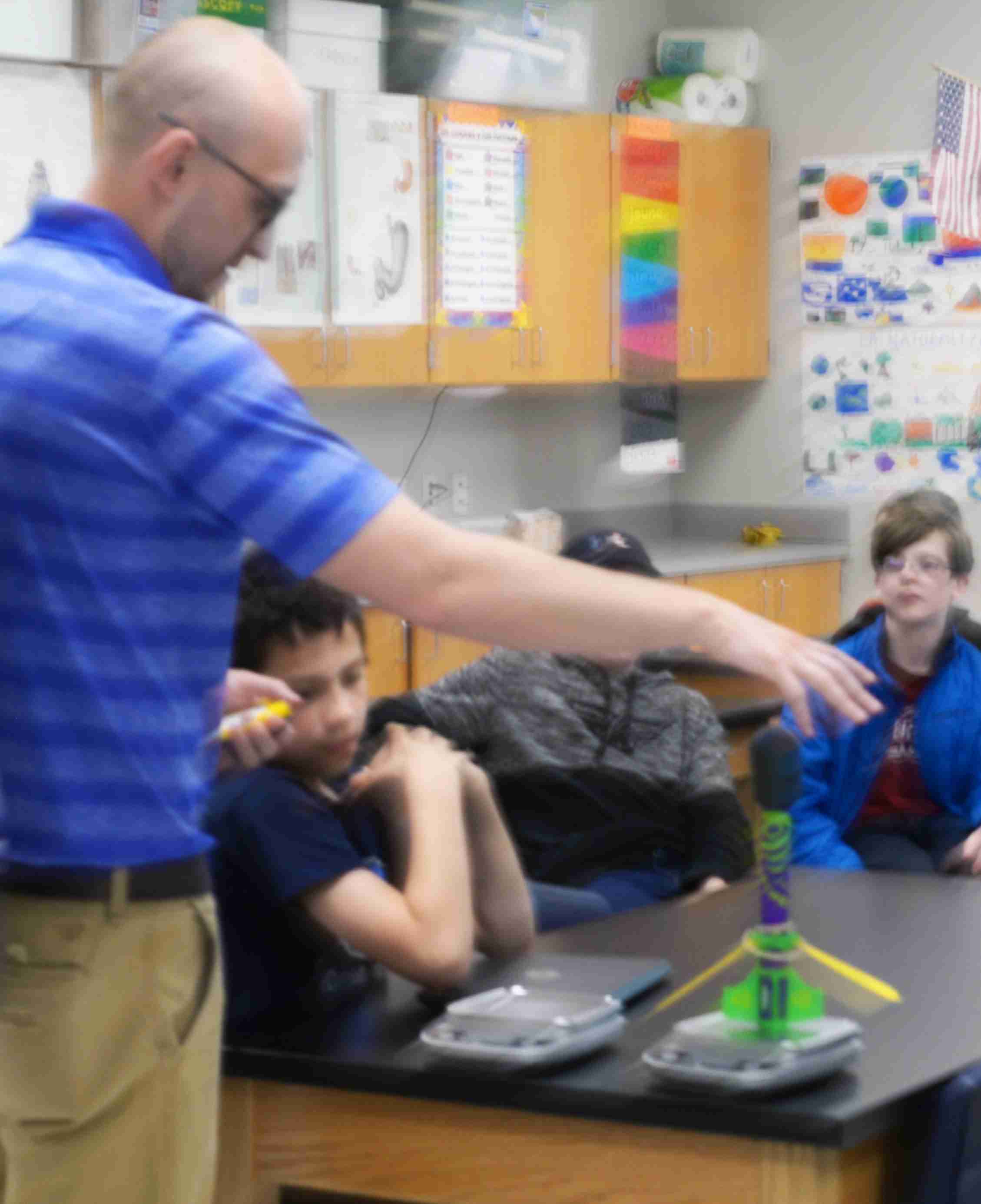 Next, how do we determine at least one more variable in the equation F = ma? Enter databot™! At this point, we connected databot™ to our ASUS Chromebook running Google Science Journal and started playing with some live data from databot™. We talked about “what is an IMU” – an Inertial Measurement Unit – which is what databot™ is packing inside along with a number of other environmental sensors. Playing with the databot™, students worked to identify the x, y, and z-axis based on the data being displayed in Google Science Journal. Each axis of the accelerometer in databot™ was displayed separately in GSJ, so it was relatively simple to practice moving and shaking databot™ until each axis had been determined.

A brief discussion about acceleration and the force of gravity also revealed another strong STEM talent in the classroom as we discussed “g forces” generated when skateboarding or biking. When I asked if anyone knew the gravitational constant that G represented a new STEM star was born – “Gravity Girl” – she nailed it at 9.8 m/s2. As we prepared for our exit from the classroom to the launch field outside, Gravity Girl and Major Force were assigned duties to manage the rocket launch. Next step – launch!

Outside, Gravity Girl took charge of preparing the rocket and its precious payload databot™, to launch. She carefully seated databot™ on the nose of the rocket for each launch trial using rubber bands. There was no padding for databot™ so this was another serious impact study opportunity for general durability in high-stress situations. Please note, the databot™ team does not recommend hurling, throwing, launching, kicking, slamming, beating, bashing, or punting databot™ without some protective gear. We wanted to make sure it can take a licking with these field tests, but in general, treat your databot™, like any lab equipment, with respect and it will last a long, long time. 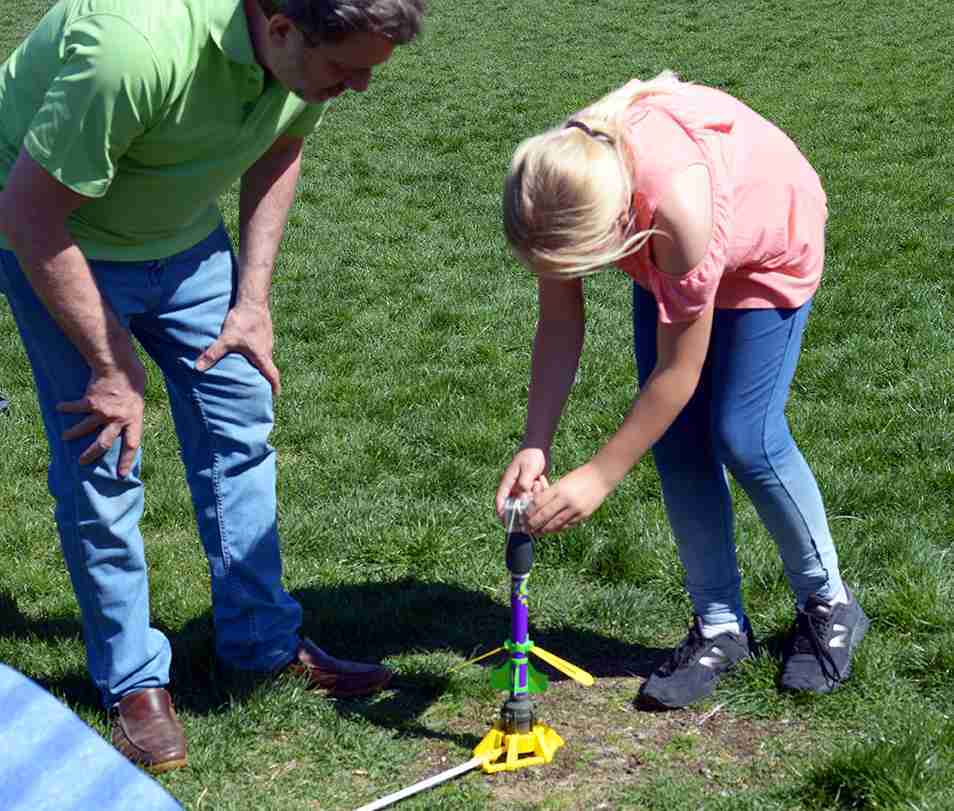 Next step was field testing the Chromebook Bluetooth connection outside and recording on Google Science Journal. Chromebooks need an Internet connection for most things, but we were able to set this up successfully for offline use outdoors. Using Google Science Journal and its recording function we were able to visualize the rocket launch data in real time as well as capture it for playback later. Another awesome feature of GSJ is that once you connect back to your network, it will automatically update your Journal data in your Google Drive. It is then available on any of your devices for viewing and study later. I use an iPhone and was able to easily show the results of the launch later to someone after my Journal files had synched. Very cool! 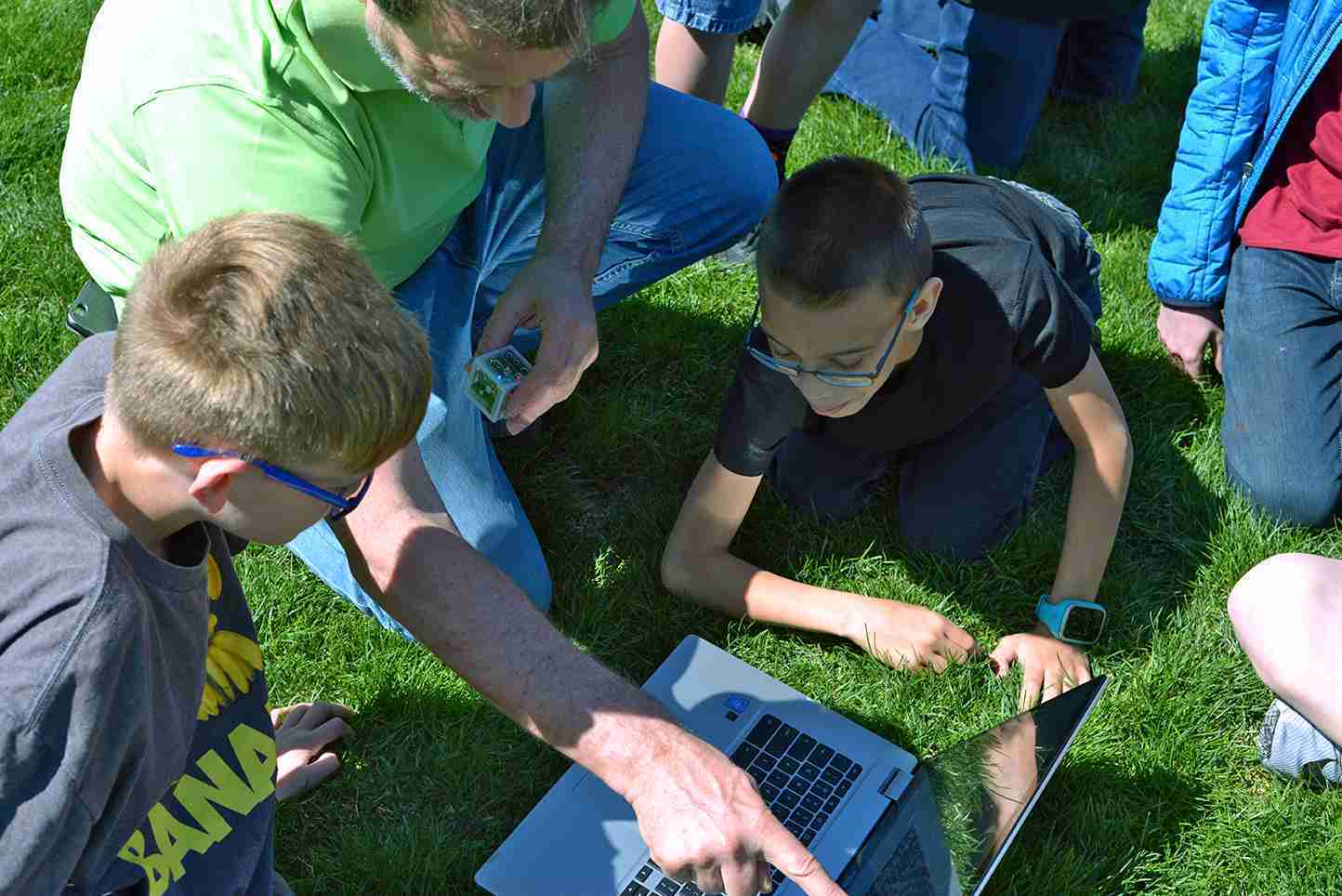 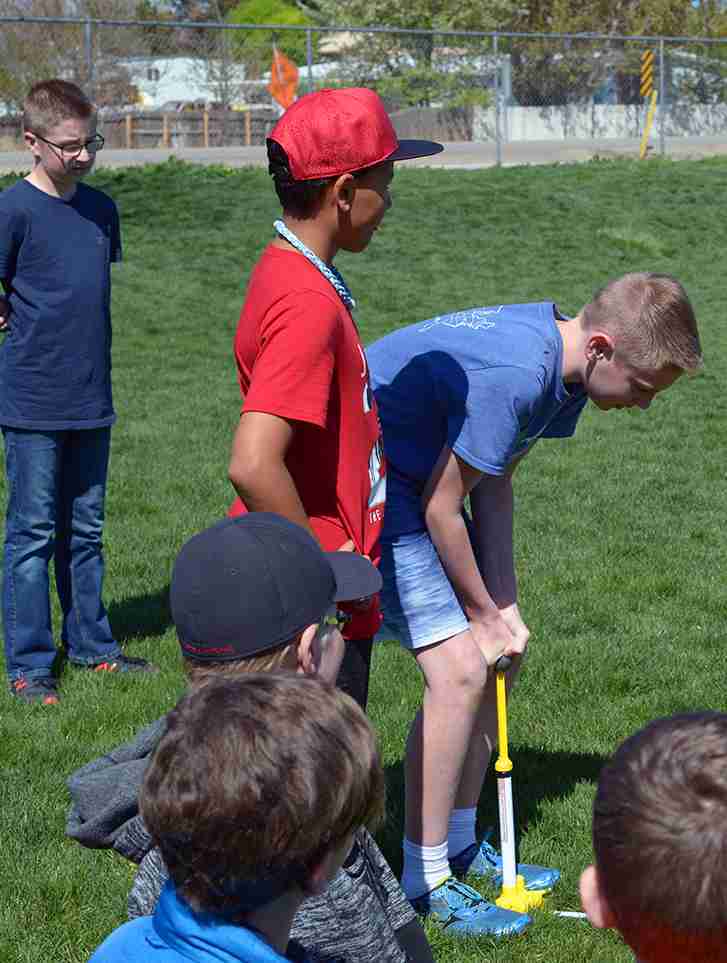 The near-final stage before the big event, Major Force pumped up the air pressure on our Estes air rocket and stood by for launch. Safety officer Gravity Girl cleared the field telling people to stand back and the Major pushed the button!

It was exciting to see the engagement of students watching the data being displayed live on the Chromebook using Google Science Journal. I noticed many of them were watching the data instead of the launch, which was remarkable. It’s hard to beat the spectacle of a good rocket launch. We will be forwarding the data and test results back to the STEM club so they can analyze it further and see if they can piece together the remaining variables required to calculate F = ma in this scenario. The opportunity to bring numbers and data and science to life using tools like this always thrills me. Some of these students will be inspired by their STEM experiences to go on to become engineers or scientists and what they may contribute to our planet might be world changing.

To cap off the databot™ experience, we culminated with a grand finale slingshot launch that put databot™ into low earth orbit – close to a 20-meter height (carefully wrapped in bubble wrap this time). This was a great test of range, and although we had been able to conduct this demonstration successfully before using an Android smartphone, the Bluetooth range on the Chromebook wasn’t quite up to it. You can see where we lose the signal in this plot, which is a great teaching moment. Since databot™ has an internal SD card to store data educators can plan for experiments that might go outside of the normal range of a Bluetooth connection, or plan to run databot™ in a remote location with some auxiliary power such as a solar panel and collect the data samples later. 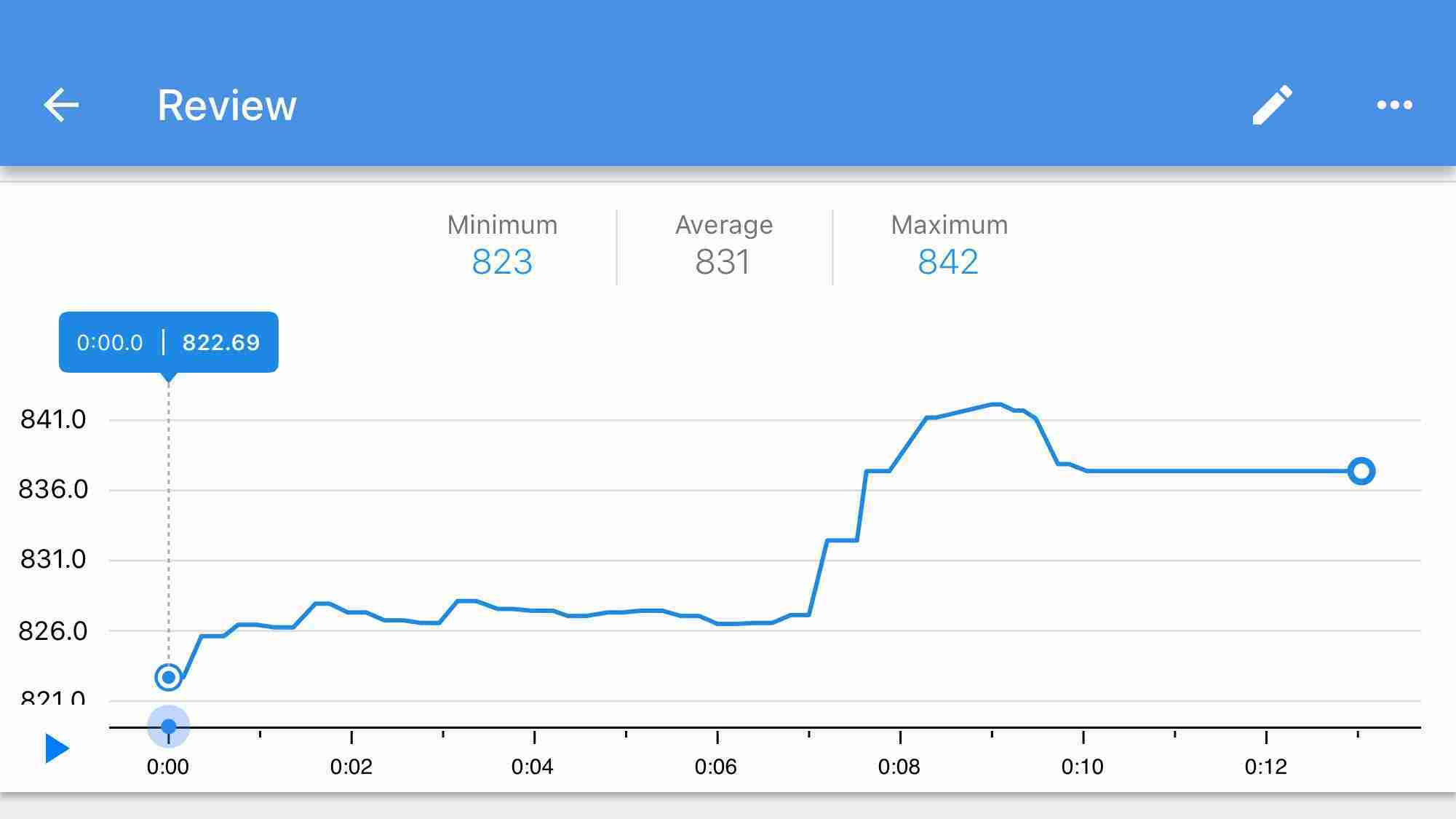 After the slingshot finale, the science and technology teachers took their STEM students back into the school and turned them loose on the construction of their rockets. These teachers are total heroes volunteering their time after school to provide experiences like this to their students, and the students will likely remember these hands-on experiences for their entire lives. We were grateful for the opportunity to bring databot™ in and join the fun for an afternoon. 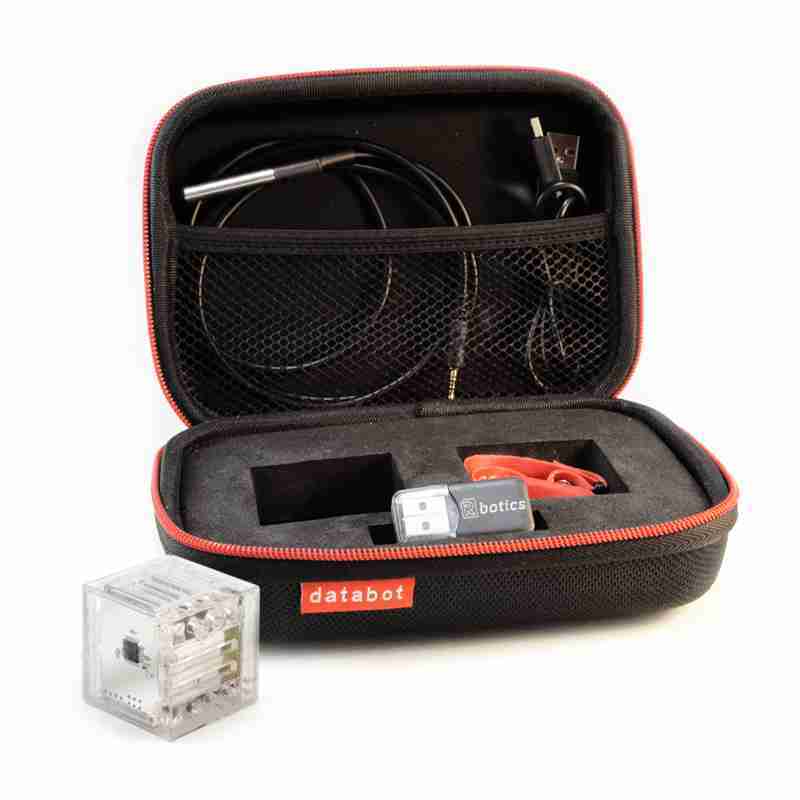 We think we have just started with GSJ and Chromebooks – it appears schools and districts can turn their Chromebook fleets into versatile, full-blown science labs with databot™ and Google Science Journal working together to empower inquiry and exploration. The full range of sensors available on board databot™ can be used to teach earth science, physics, chemistry, environmental sciences, and even life science making it possible for one, inexpensive device to be shared and used by many educators in the same building. Thanks for reading and stay tuned for our next adventure in STEM. Please share and like this article. It’s appreciated!